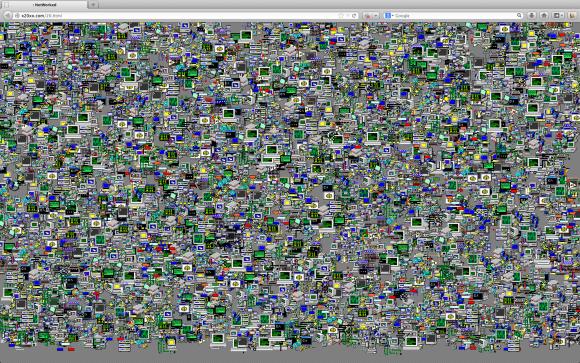 In the current situation where social distancing is the norm and physical meetings and events have been replaced by online gatherings and video calls, we are more depending on technology than ever before. But what if these online structures are no longer there or stop working? Do we have to find and create alternative structures to stay alive or is technology of vital importance in our modern world - and should therefore be part of our survival strategy? And if so, how?

These questions of how and to what extend build technological infrastructures and to believe in the continuous development of technology (or not) addresses current issues as well as historically recurring topics. In this LIMA online program, internet artists Joan Heemskerk (JODI) and Heath Bunting will discuss and reflect on the position of the internet and whether it could be part of a modern survival strategy. The conversation will be moderated by Florian Cramer.

Joan Heemskerk (JODI)
JODI is a duo consisting of Joan Heemskerk and Dirk Paesmans. The two artists, with a background in video and photography, turned their attention to the web in the 1990s, and became key participants of the net.art movement. JODI has created some of the most subversive internet artworks since, subjecting the medium to a critical analysis and dismantle its structures. The work of JODI uses the widest possible variety of media and techniques, from installations, software and websites to performances and exhibitions. In a medium-specific way, the work deconstructs and analyses the languages of new media: from visual aesthetics to interface elements, from code to breaking code. JODI challenges the relationship between technology and users by subverting our expectations about the functionalities and conventions of the systems that we depend upon every day.

Heath Bunting
Heath Bunting has exhibited, performed and taught internationally for over 25 years. During the rise of the internet, he was, like JODI, a key participant of the net.art movement and founded irational.org. Bunting has produced many highly recognised internet projects and has helped form a strong context for the practice of net.art. Recently, he has moved into the field of genetics proclaiming it to be the next "new media". He’s also developing work in the area of physical network performance. In his current work, The Status Project, Bunting uses artificial intelligence to search for artificial life in both societal and natural systems. Bunting regularly runs training workshops in artist resilience.

Florian Cramer
Florian Cramer is a lecturer, researcher, writer and theorist. He works as a practice-oriented research professor in 21st century visual culture at Willem de Kooning Academy and Piet Zwart Institute in Rotterdam. Cramer is specialized in autonomous practices, focusing on DIY artist-run initiatives and self-organisation as contemporary art. Florian Cramer studied literature and art history at FU Berlin, Universität Konstanz and University of Massachusetts at Amherst. He received an MA in comparative literature, art history and modern German philology from Freie Universität Berlin and holds a PhD in comparative literature.

This program is part of LIMA’s online series that takes place every Wednesday at 8 pm.
More information: https://www.li-ma.nl/lima/news/lima-online-program

During the closure of our exhibitions and restrictions on events due to COVID-19, we are moving more of our program...