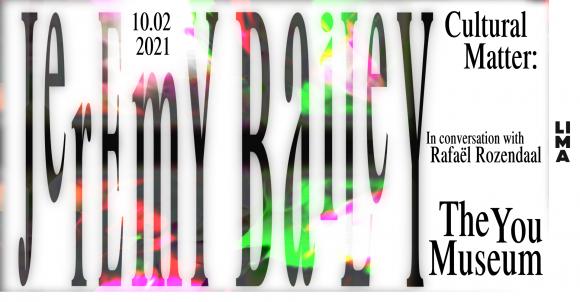 The final edition of Cultural Matter will focus on Jeremy Bailey’s The You Museum, an evenly utopic as dystopian, but always humorous, personalised online museum. The project critically reflects on consumerism on the web and the perversity of the art market by playfully infiltrating the structures of the first, and mimicking the ones of the other. The project was developed during Bailey’s residency at The Moving Museum in Istanbul in 2014 as a physical installation in a converted parking garage. It was later turned into a museum presenting artworks in banner ads online. After having filled in your art preferences, your banner ads will suddenly show Bailey featuring personalised artworks in his hands as if they were an upscale perfume bottle. By clicking a banner you can buy the artwork as a print on a variety of homewares (pillows, mugs and tote bags). The You Museum becomes a part of your offline private life in addition to your online one.

This edition of Cultural Matter questions and discusses Bailey’s online museum. On Cultural Matter’s online platform, The You Museum will also be reactivated for the length of the show. Together with the invited guest Simon Sakhai (founding curator of The Moving Museum, Istanbul), Jeremy Bailey and Cultural Matter curators Sanneke Huisman and Jan Robert Leegte will dig into the humorous and serious matters that The You Museum addresses.

Jeremy Bailey is a Toronto-based self-proclaimed ‘Famous New Media Artist’ and Head of Experience at FreshBooks. In his work, Bailey explores the performativity of technology in various multidisciplinary projects. He believes we can flip tech's power upside down, and that technology, creatively misused, empowers us all to be famous. Bailey studied at the University of Toronto from 1998 to 2002 and completed his Masters in Fine Art from Syracuse University in 2006. He participated in numerous solo and group exhibitions, including: Electronic Superhighway, Whitechapel Gallery, London, UK (2016), You Are Here: Art After the Internet, ICA, London, UK, (2014); The Jeremy Bailey Collection, Transmediale, Marshall McLuhan Salon, Berlin, Germany (2012); Mosaic, Polytechnic Museum, Moscow, Russia, (2012); Mediascape, a pas de Nam June Paik, Nam June Paik Art Center, Seoul, South Korea (2011); Space Invaders, NIMk, Amsterdam, Netherlands (2010).

Cultural Matter is a series of exhibitions and events that provide a platform for the international discussion of digital art and highlights the enduring expressive power of digital artworks: works in which art and technology and the past and the future come together in a way that is as logical as it is groundbreaking.

The internet is dominated by controlling and selecting (and censoring) structures and algorithms. Dutch artist Harm van...