Artists Talking Back to the Media in Colombia 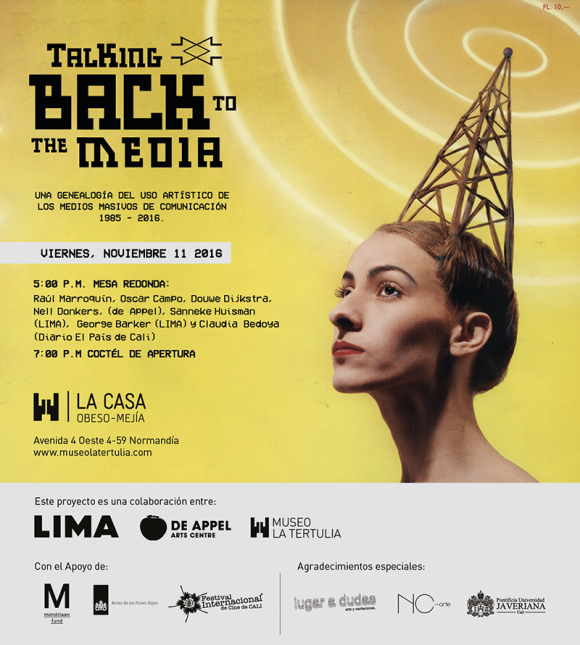 The LIMA team has landed in Colombia to conduct a series of workshops, presentations and exhibitions in Cali and Bogotá taking place from 9th - 18th November. Sanneke Huisman (LIMA), George Barker (LIMA), Nell Donkers (de Appel) and the artists Raul Marroquin and Douwe Dijkstra are participating in the project alongside Ivan Tovar and Natalia Castillo Overdugo who have facilitated the operations on a local level in Colombia. From the extensive archive located at LIMA and de Appel arts centre, a video, poster and paper selection has been made for presentation in collaboration with the artists and the multiple participating institutions in Colombia. This selection aims to represent the manifestation of 1985 in as many aspects as possible, containing national and international artists such as Raul Marroquin, General Idea, Ulises Carrión, Barbara Bloom, Eric Bogosian and Richard Serra. The chosen works represent the different media that were used in the Talking Back to the Media project of 1985 as well as an amalgamation of its conceptual frameworks of mass media critique and dissemination. Contemporary artists from the LIMA collection will also be presented including works from Douwe Dijkstra, Elodie Pong, Oliver Laric and Constant Dullaart. The contemporary works chosen for exhibition aim to draw genealogies between artists relations with the mass media of the past and present, tracing similarities and drawing differences between now and then technological and ideological practices. The opening of the exhibition at La Casa Obesa Mejia - organized in association with La Museo Tertulia and the Cali Film Festival - will be on the 11th November in Cali at 5:00pm. In Bogotá, the exhibition will take place at KB | espacio para la cultura.

In the spirit of the original Talking Back to the Media, a process of rapid intervention to the subject matter of talking back to the media has been enlisted as the curatorial process for the project in Colombia. By hosting presentations and workshops at local universities such as Bellas Artes and CREA Universidad Nacional de Bogotá with the aid of Raul Marroquin, young visual artists have responded to the project and will also exhibit works that speak to the overarching themes of Artists Talking Back to the Media. Through the inclusion of the perspective of young and establish Colombian media artists, it is the intention to reinvigorate some of the artistic energy geared towards mass media critiquethat was observed in the original Talking Back to the Media. The contemporary artists selected (both Colombian and Dutch) will represent a generation that has, under the ever increasing importance of the internet, become the media. In selecting such works and presenting them through discussion and exhibition, the project seeks to ask how contemporary artists position themselves in a rapidly changing media landscape, and if historical philosophies surrounding older media and mediums still hold relevance to their work.

Academic research and reflection was and will also be an important part of the Talking Back to the Media project. By involving local communities in university programmes and the thriving local art scene in San Felipe Bogotá , LIMA hopes to interrogate, question, and source new perspectives on the shift that has taken place in the media landscape from 1985 to the current day and its relation to artistic practices. Upon return to the Netherlands, the project will become further disseminated as LIMA will collaborate with a working group at the VU University in 2017. Led by Sven Lütticken, art history students will research Talking Back To The Media in order to contribute comparable perspectives on the development of media technology, art history, social practices and curatorial structures in the Netherlands from 1985 to the present day. In collaboration with LIMA, the further research taken into Talking Back to the Media in the VU will also contribute to a symposium anticipated to be held in May 2015, where both the contemporary and historic exhibitions will be examined by scholars and artists.

Artists Talking Back to the Media has been supported by the Mondriaan Fund and the Dutch Embassy Colombia. Content from the workshops and exhibitions in Colombia as well as further information about the exhibitions is available at De Hoeksteen Live Cornerstone.