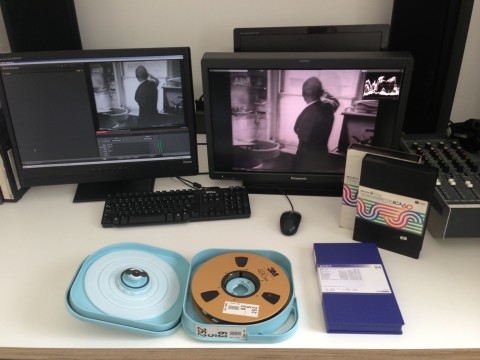 As part of the of the Digitising Contemporary Art project, LIMA has digitised the media art collection of the artist duo Stansfield/Hooykaas. Together with Madelon Hooykaas, the entire archive of the Scottish-Dutch duo has been catalogued and digitised to ensure that this unique collection of works is accessible for the future.

Elsa Stansfield (1945-2004) and Madelon Hooykaas (1942) began their collaboration in 1972. The artists produced their first video installations from 1975 onwards and acquired fame as European video pioneers. During their 32 year partnership they produced around 150 works, in which movement and change are recurring elements Stansfield and Hooykaas dealt with the relation between nature and spirituality, and explored scientific principles and natural forces such as radio waves and magnetic fields. For this, the artists made use of contemporary technology such as film, audio and video in combination with organic materials such as sand, glass and copper. The work is included in various international museum collections, and their installations and films have been exhibited in many venues worldwide, amongst other Documenta, Kassel and several biennales. At the Film Festival in Split, Croatia in 1999 the artists were awarded the Grand Prix for New Media for Person to Person, a CD-ROM based artwork.

The exstensive collection of the artist duo contains more than ninety artworks and pieces of documentation, including 8mm and 16mm film and audio and video tapes of various carriers and formats. Furthermore, paper documentation including scripts, project proposals, contracts, notes and correspondence with museums and galleries constitutes a large part of the collection.

In the digitisation process, two main challenges were faced:

At LIMA, the tapes have been cleaned before being captured as uncompressed digital files. From these uncompressed archival master files, MPEG-2 video files have been created for exhibition and viewing purposes, and MPEG-4 files for online use. All the digitised works of art can now be accessed through the online LIMA catalogue and the master tapes are stored in our specially designed climate-controlled vaults.

A detailed report of the case study can be consulted here.

Digitisation is necessary for the preservation of video art and we are specialists in this field. At LIMA you have the...