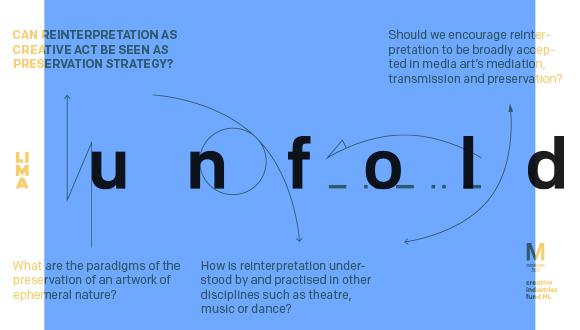 After the first fruitful UNFOLD-event on the 6th of June 2016, the second public UNFOLD programme will revolve around discourses on liveness, embodiment and memory in performance, new media and digital art within institutional contexts. We will turn around key concepts such as presence, agency and embodiment to investigate conventional strategies by which society preserves and redisplays cultural artifacts created with media formats. All lecturers will touch upon questions a reinterpretation poses on the original work of art and artist, on the reinterpreting artist, and on the practice of exhibiting.

For the programme of UNFOLD #2, we are more than happy to have lectures by researcher Annet Dekker, curator Sarah Cook and artist Manuel Pelmus. From their own field of expertise, they will share their thoughts on the research question weather reinterpretation can be a strategy for the active conservation of media art. We end the evening with a discussion, moderated by art historian Katja Kwastek.

Sarah Cook “Good artists copy: “something better, or at least something different.”” In this talk, Cook will talk about the idea of reinterpretation from a museological and archival perspective. Reinterpretation - as a museological preservation strategy for art - places different demands on the originator of the work (an artist) as on its future exhibitor (a curator). Is reinterpretation too materially-focused as a strategy for works of art that are inherently conceptual, or remain deliberately unfinished or are ever-changing?|

Annet Dekker “Preserving the social dynamics of net art’. In this presentation Dekker will touch upon the idea of liveness within digital art and media art. In an attempt to capture ‘living’ artworks, she will explore the use of storytelling as a preservation strategy of these artworks.

Manuel Pelmus “Thoughts on Liveness: Memory, interpretation, repetition and the living body.” In this talk Pelmus will explore remediation and his conceptualization of an embodied history. This will be done by using his own performances as case study, especially the work he did together with Alexandra Pirici titled Public Collection of Modern Art (2014).

Katja Kwastek will round up the evening by leading a panel discussion.  She is professor Modern and Contemporary Art at the Faculty of Humanities of VU Amsterdam whose research interests focuses on modern and contemporary art and media, media aesthetics, audiences of art and digital humanities.

This project is made possible by the Mondriaan Fund and Creative Industries Fund NL. Sarah Cook is a curator, writer and researcher based in Scotland. She is the co-founder and co-editor of CRUMB- the longstanding online resource for curators of new media art.

At UNFOLD #2, Sarah Cook's talk 'Good artists copy: “something better, or at least something different”' will highlight reinterpretation from a museological and archival perspective. Reinterpretation - as a museological preservation strategy for art - places different demands on the originator of the work (an artist) as on its future exhibitor (a curator). Is re-interpretation too materially-focused as a strategy for works of art that are inherently conceptual, or remain deliberately unfinished or are ever-changing? On September 1st, Sarah Cook’s latest book was published: INFORMATION (Documents of Contemporary Art, Whitechapel and MIT Press, 2016, edited by Sarah Cook). she readdresses information-based-art - from exhibition curation to looking at how artists have tackled the materiality, immateriality and post-digital unruliness of information in their work. For many years, she has curated exhibitions of New Media art and was instrumental in establishing New media as an academic subject and an accepted art form.

Romanian artist Manuel Pelmus has a rich background in choreography and gradually moved into the field of visual arts. Together with Alexandra Pirici, Pelmus represented Romania at the -55th- Venice Biennale with the acclaimed project ‘An Immaterial Retrospective of the Venice Biennale.’ In his presentation at UNFOLD #2, Pelmus will share his thoughts on liveness, memory, interpretation, repetition and the living body through examples of his own practice.

Indeed, the latest work Public Collection Tate Modern 2016 by Manuel Pelmus and Alexandra Pirici is a live exploration of artworks that questions the museum as a permanent collection. This new site-specific work is enacted by a group of five performers who use their bodies to transform artworks originally made in other media. These include well-known and not so well-known works from the Tate collection such as Mark Rothko’s Seagram murals 1958-9, Carl Andre’s Equivalent VIII 1966 and Tania Bruguera’s Tatlin’s Whisper #5 2008 (itself a performance), alongside works from other public collections including MoMA’s Harun Farocki, Workers Leaving the Factory, 1995. Though the work is playful, at the same time it critically proposes an alternative system of value in which the live act prompts us to consider how we might embody a shared heritage.
Pelmus’ recent work has been presented, among others, at the Van Abbe Museum - Eindhoven, Tate Modern, The Kiev Biennale, Museum of Modern Art Warsaw, Para/Site- Hong Kong, Centre Georges Pompidou - Paris, Museum M -Leuven, FIAC - Paris, Modern Museum Salzburg, The National Museum of Art Romania. Pelmus was awarded the Berlin Art Prize for Performing Arts in 2012 and the Excellence Award of the National Dance Center in Bucharest in 2014.

Annet Dekker will talk about “Preserving the social dynamics of net art’. In this talk Dekker will touch upon the idea of liveness within digital art and media art. In an attempt to capture ‘living’ artworks, she will explore the preservation of artworks through storytelling. Such an approach requires a close reading of the process and functioning of online culture through some of the inherent characteristics of net culture: exploration, ambiguity, ongoing processes, versioning and mutation. And it uses methods from ethnography, oral history and archaeology together with computational and more traditional literary/visual analysis to decipher and comprehend the narratives that can be traced through e-mail list archives, interviews, presentations, and automated archiving systems.

To show what this could mean several examples will be highlighted, which capture the emotional or intellectual affect that online culture might trigger; ranging from analogue artists books (Erica Scourti, ‘The Outage’), performances and lectures (Constant Dullaart, ‘The Possibility of an Army’) to more speculative archival strategies based on distribution (‘Sharing is Caring’ and Bibliotheca) and (re)interpretation (Erica Scourti, ‘Dark Archives’). In the process, these examples will show that archiving and collecting are no longer just an act connected with power of institutions and authority, but that there is a shift to audience members, users or participants that are actively involved in the preservation of online culture. At the same time, it shows that such narratives could, and should, be part of and be (re)told in institutions with the aim of presenting the different histories of contemporary art, despite their challenging or ‘ephemeral’ nature.

Annet Dekker is an independent researcher, curator and writer. She is interested in the influence of technology, science and popular culture on art and vice versa.
She is currently Researcher Digital Preservation at TATE, London, Post-doc Research Fellow at London South Bank University / The Photographers Gallery. Previously she worked as Web curator for SKOR (Foundation for Art and Public Domain, 2010–12), was programme manager at Virtueel Platform (2008–10), and head of exhibitions, education and artists-in-residence at the Netherlands Media Art Institute (1999–2008).
In 2009 she initiated aaaan.net with Annette Wolfsberger: they coordinate artists-in-residences and set up strategic and sustainable collaborations with (inter)national arts organisations. regularly contributes to peer-reviewed journals
and edited volumes (Preserving and Exhibiting Media Art edited by Julia Noordegraaf et al, Amsterdam University Press, A Companion to Digital Art, edited by Christiane Paul and Fun and Software edited by Olga Goriunova, Bloomsbury).

LIMA presents the kick off of UNFOLD: Mediation and Remediation of media art, re­enactment and reinterpretation. LIMA...