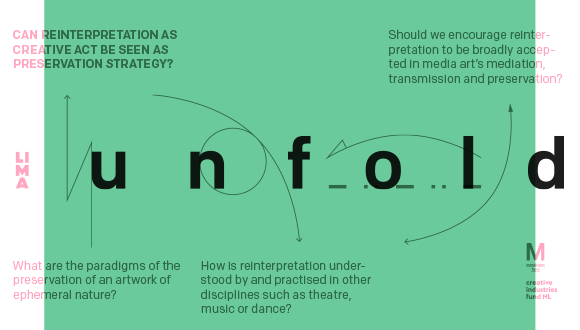 LIMA presents the kick off of

UNFOLD: Mediation and Remediation of media art, re­enactment and reinterpretation.

LIMA is researching new methods for the documentation, transmission and preservation of media art, digital art and performances. This new one-year research project is a collaborative, international research network that together will be examining re-interpretation as emerging practice for conserving of media artworks.

We are happy to announce the first public events LIMA will host in the context of its new research project ‘Unfold: Mediation by re-interpretation’.
This evening we welcome academic researchers Serena Cangiano and Gabriella Giannachi; we have artist Joost Rekveld with us who is connected to the UNFOLD - project as creator of new work, and we will end the night with a panel discussion moderated by Katja Kwastek.

Gaby Wijers (Director LIMA) and Lara Garcia Diaz (Art Theorist and UNFOLD - researcher) will welcome you this night.
Serena Cangiano (Researcher and coordinator of Master in Interaction Design at SUPSI Lugano) will give a lecture on Mediation and Remediation of a media art casestudy: the project Reprogrammed Art (http://www.reprogrammed-art.cc/).
Gabriella Giannachi (Professor in Performance and New Media, and Director of the Centre of Intermedia at the University of Exeter) will give a lecture called ‘Unfolding Performance’; on Mediation and Remediation of new media art and performances.
Joost Rekveld is an artist who is part of the UNFOLD - research team. He will talk about his project on the work of The Vasulkas - which is part of the LIMA collection. By producing a re-interpretation of The Vasulkas a case study emerges to draw upon in order to identify parallels in the mediation of a work and related notions of authorship, authenticity, autonomy, documentation, memory, continuity and liveness.
Katja Kwastek will round up the evening by leading a panel discussion. She is professor Modern and Contemporary Art at the Faculty of Humanities of VU Amsterdam whose research interests focuses on modern and contemporary art and media, media aesthetics, audiences of art and digital humanities.

Serena Cangiano will talk about Re-programmed Art: an open Manifesto. The project “Re-programmed art” aimed at involving digital artists in the process of reprogramming artworks by Gruppo T, an Italian collective of artists that pioneered the introduction of technology and of an algorithmic approach in the process of artistic production. Programmed art is the definition given to the body of works by a group of Italian artists active between the end of the fifties and the beginning of the sixties. This definition was introduced by Bruno Munari and Umberto Eco in 1961 on the occasion of an exhibition hosted at the Olivetti showroom in Milan, featuring works by Munari, Enzo Mari and the artists of Gruppo T (Giovanni Anceschi, Davide Boriani, Gianni Colombo, Gabriele Devecchi, Grazia Varisco) and by Gruppo N. http://www.reprogrammed-art.cc/

For the start of 'UNFOLD: Mediation by re-interpretation' Serena Cangiano will be showcasing the results of the reprogramming session of the artworks by Gruppo T and the experimental and collaborative experience of the workshop sessions in Lugano.

Serena Cangiano is researcher at Laboratory of visual culture/interaction design lab of SUPSI, the University of Applied Sciences and Arts of southern Switzerland. where she coordinates the Master program in Interaction design. Her research focuses on open design and hardware practices and their impact on the technological innovation. She develops projects in the field of interaction design, social innovation, interactive art preservation. She manages the fablab SUPSI Lugano and the summer programs related to electronic prototyping, creative coding and data visualization.

Gabriella Giannachi will discuss practices of re-interpretation, re-mediation and re-transmission of performance and media artworks, looking specifically at the role played by documentation in this process. She will be showcasing works of Valie Export, Lynn Hershman Leeson, and Musee de la Dance to revisit the idea of what constitutes performance; examine how performance unfolds over time; and show how viewers become implicated into the processes that are at stake for the production of the legacy of performance.

Gabriella Giannachi is Professor in Performance and New Media at the University of Exeter. She has published a number of books, including Virtual Theatres (2004), The Politics of New Media Theatre (2007), Performing Presence: Between the Live and the Simulated (co-authored with Nick Kaye, 2011), Performing Mixed Reality (co-authored with Steve Benford, 2011), Archaeologies of Presence (co-edited with Michael Shanks and Nick Kaye, 2012) and Archive Everything (2016). She has written papers for a number of humanities and science journals, and has been involved in several projects funded by AHRC, RCUK, and Heritage Lottery Fund in collaboration with Tate, Royal Albert Memorial Museum and Art Gallery, 1010 Media, and Exeter City Football Club Supporters Trust. She is currently editing a book on the history of performance documentation.

Joost Rekveld is an artist who is part of the UNFOLD - research team. He has been making abstract films and kinetic installations since 1991, initially judging by the idea of a form of music for the eye. He develops his own tools, frequently inspired by historical impasses in science and technology. He made projections and light composition for several dance and theatre productions and also works as a curator and teacher. http://www.joostrekveld.net/

UNFOLD #2 Reinterpretation as Creative Act After the first fruitful UNFOLD-event on the 6th of June 2016, the second...