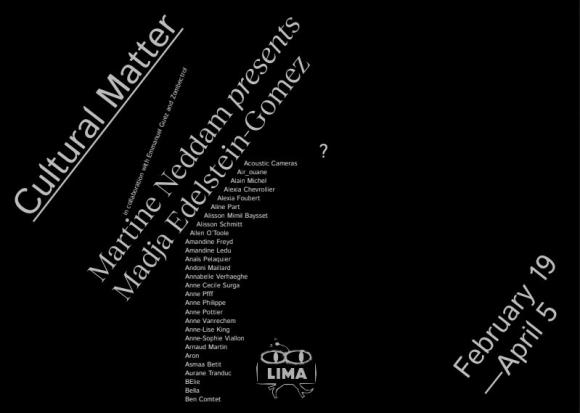 LINK TO THE ONLINE STREAM AT 8: https://youtu.be/Y36PHdlw1SY

The history of fake identities is tightly interwoven with the rise of the internet - the free and open space where you could be anyone you wanted to be. What role did - and do - artists play in this? How do they develop and manifest characters online? Early net artist Martine Neddam has been creating online  fake personas that work with public feedback since 1996, far before the establishment of social media. Mouchette, David Still, Xiao Qian are all characters that she created anonymously. This edition of Cultural Matter 2019-20, the audience will get to know the online curator Madja Edelstein-Gomez. The work of Neddam and Edelstein-Gomez will act as a starting point for further reflection on online identity and user feedback - and will be placed in an art historical and socio-political context.

Martine Neddam
Martine Neddam is an artist, researcher and teaches at the Gerrit Rietveld Academy and the Sandberg Institute in Amsterdam. She uses language as raw material for her art, and many of her works center on the phenomena of speech acts, approaches to communication as well as to language and writing in public space. She has been working with virtual characters since 1996, the first and most famous one being Mouchette, a fictive thirteen-year-old that has meanwhile acquired cult status. Neddam’s virtual personae function as communications tools such that they have already facilitated the exchange between human beings via the medium of the artistic figure, and thereby anticipated the functionality of social media.

Diana McCarty
Independent media producer and feminist media activist Diana McCarty is a founding editor of reboot.fm, the award winning free artists’ radio in Berlin; a co-founder of the radio networks Radia Network (radia.fm) and 24/3 FM Radio Network Berlin; and of the FACES (faces-I) online community for women, among other initiatives. She co-initiated the exhibition Nervous Systems: Quantified Life and the Social Question, Haus der Kulturen der Welt, 2016, Berlin, and actively collaborates with the experimental media project Luta ca caba inda. As a cyberpunk in the 1990s, she was active in independent internet culture with nettime, the MetaForum conference series, and different hacking spaces. Her work revolves around art, gender, politics, radical feminism, technology, and media. McCarty is a BAK Fellow 2019/2020.

Cultural Matter
Cultural Matter is a series of exhibitions and events that provide a platform for the international discussion of digital art and aims to develop new strategies for the presentation and preservation of these artworks.
Also part of the Cultural Matter series: JODI, Jonas Lund, Rafaël Rozendaal, Amalia Ulman, Thomson & Craighead.
Curated by: Sanneke Huisman and Jan Robert Leegte.

The lecture by Diana McCarty on a Techno-Feminist alphabet will be live streamed online next week on Wednesday 1 April at 8 PM! Followed by a conversation between artist Martine Neddam and Diana McCarty with a Q&A moderated by Sanneke Huisman afterwards. Please subscribe to our YouTube channel for the stream.

Exhibition
At the moment our exhibition Cultural Matter: Martine Neddam in LIMA's gallery space at LAB 111 is closed until further notice. But you can watch the video's that are included in the exhibition online from the comfort of your own home: