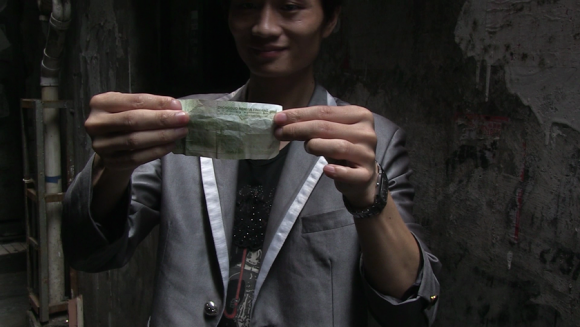 LIMA proudly presents seventeen new works that have recently been added to the LIMA distribution collection. This selection - like the rest of the collection - consists of works by established artists and emerging talent. Among these works are Rituals (2012) by Julika Rudelius, Edison Bay (2013) by Michiel van Bakel, The shores of an island I only skirted by Sander Breure & Witte van Hulzen (2012) and Nicholas Provost's recent work Tokyo Giants (2012). We have highlighted these four works.

Rituals (2012) is the latest work by Julika Rudelius which she made in China. LIMA already has a number of Rudelius’ works in distribution, and is pleased to be able to expand it with this work. Rituals is a valuable addition to the interesting work of the artist – and the collection of LIMA.

In the double screen video work Rudelius shows Chinese young men in the crowded streets of the metropolis Guanzhou. The young boys are characterized by their distinctive clothing and hairstyles. Like many of Rudelius’ works, watching Rituals can be uncomfortable at times. This characteristic voyeurism is at its strongest when the boys take erotic poses in front of the camera – in the middle of the street. Especially the ease with which they do this, can give the viewer a certain feeling of shame. Further more, the work shows young female singers who are showered with paper money, and a mysterious magician who turns one yuan into hundred yuan.

Edison Bay shows the passage of time in the port of Rotterdam. Van Bakel's latest work is an experimental film made ​​using multiple cameras from 25 angles. The artist shows the Rotterdam harbour landscape seen from Edison bay towards Yangtze port, where Ultra Large Container Carriers from China are unloaded. Edison Bay shows a juxtaposition of two more or less different realities: a floating human figure against a 'sublime' industrial horizon. The work is accompanied by a soundtrack of natural and electronic sounds, recorded on the spot.

Sander Breure & Witte van Hulzen, The shores of an island I only skirted, 2012

Emerging through the hazy light we see an island. Pastoral greenery comes into view. An idyllic portrait of nature, until we realise what we're looking at. We see images of nature on the island of Utøya. Then a collage of images from secondary sources on the internet. Besides a complex game with reality as fiction, topical themes such as the political tensions in Europe, security and mass migration and immigration give thrust to this work.

Tokyo Giants is the last part of the Plot Point Trilogy by Nicolas Provost with the Japanese capital Tokyo and its inhabitants as the leads. Provost focuses on everyday scenes, from a couple arguing to lost drunks in the hyperkinetic city at night. There is the suggestion of a murder, probably planned by the Yakuza. Provost doesn't tell the story, but does incorporate the classic crime genre's tension. Surreptitious music, meaningful glances, cell phones and sirens create powerful suspense that is never resolved.

Futhermore, these works have been added to the distribution collection.

For further information about these, and other works in the LIMA collection, visit our online catalogue.