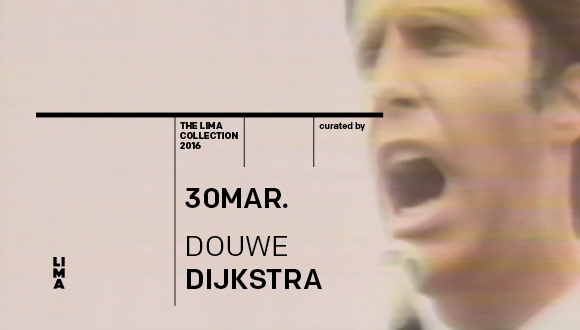 A white flag, a burning television. How do media artists from the seventies and today deal with mass media? How do they create or criticise a media event? And what is their position within society?

For this second edition of THE LIMA COLLECTION, video artist Douwe Dijkstra selected old and new works revolving around the theme media activism. With the same humour that characterises his own work, but also with a critical eye, he will present work by, among others, Ant Farm, Manuel Saiz, Jeroen Kooijmans, Donna Verheijden and Wim Gijzen.

SPECIAL GUEST: Harmen de Hoop, a visual artist who makes anonymous and illegal interventions in public space, will join the event! In conversation with Douwe Dijkstra, he will present his work and reflect on the theme.

SPECIAL SCREENING: The recent work Symbolic Threats by Mischa Leinkauf, Lutz Henke, Matthias Wermke will be screened. Inspired by the heated debate over the two flags that suddenly appeared on the towers of the bridge, the film asks what kind of societal scope art has in the present day. This short film was nominated for the Golden Berlin Bear and the European Film Award.

Project
This screening series presents all the richness of media art within THE LIMA COLLECTION. Guest curators make a...