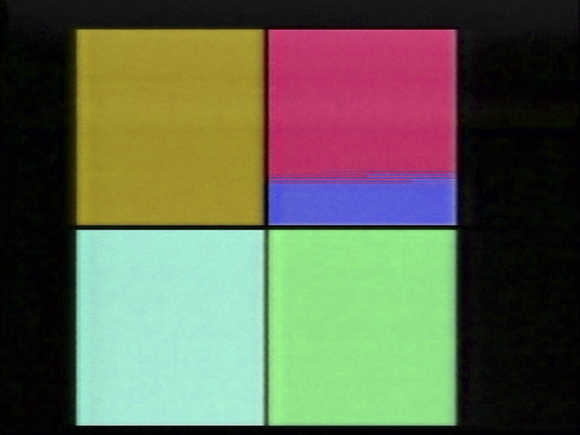 Recently shown at the IKONO video festival (6-29 september 2013) and on view in the LIMA catalogue is the work GRID 3 from the Dutch artist Peter Struycken. Computer-generated images are common now, making it difficult to imagine how innovative Struycken was when he first used computers to create works of art in the late 1960s. He was a pioneer in connecting the capabilities of the computer with the considerations and objectives of art in the sixties.

On view in the catalogue is a video registration of the real-time computerprogram GRID 3. Peter Struycken wrote the program in 1977 to generate a succession of colours in a grid. The program functions on an 8 bits system of colour precision, enabling 256 different colours. Currently, most graphics hardware runs in 25-bit truecolour or 32-bit truecolour, but it should be clear that 8 bits colour precision was revolutionairy at the time.

The work shows 4 different colours in a grid, changing in a random order. Due to the ever changing juxtaposition of the colours, it becomes possible to get associated with the whole range of colours, their structure and consistency. The idea is to determine the quality of change, which can be big or small, sudden or gradual. The difference between the colour pattern is far more important than the colour patterns themselves.

Besides GRID 3, Peter Struycken developed other computerprograms such as DISP, VLOEI, SQUARE and LINE. These programs were the first experimentations with virtual colour spaces that would later on develop into threedimensional colour spaces. The purpose of these programs is to show that form and colour can be correlated mathematically

For the registration on view, the computer was attached to a colour television-screen. This was before the time of widescreen and HD television which explains the black outline. Ground-breaking at the time, the technology the work functions on, has now become obsolete. As the source code of the original computerprogram is lost, the video registration is all there is left. To have the work function in real-time again, a reconstruction that operates on the latest technology is required. This video registration of GRID 3 is therefor of great value. On the basis of this documentation, the work can be reconstructed by the artist.

Recently the Groninger Museum commissioned a reconstruction of Peter Struycken’s VARA-programma. LIMA followed the process of the reconstruction and will be collaborating with SBMK (Stichting Behoud Moderne Kunst) on the rehabilitation of DISP 3 and other computer generated artworks by Peter Struycken. The work will remain its original look and feel, but will operate on the latest technology in order for LIMA to preserve this pioneering work for future generations.

Nina van Doren has a background in art history and currently studying for a MA degree in Comparative Arts and Media Studies at the Vrije Universiteit Amsterdam. She works as a researcher at LIMA focussing on the artist Peter Struycken. During her years at the University of Amsterdam, Nina has persued studies related to digital art, media art and museology. She works as a reporter at conferences and provides documentation of the preservation process of digital / media artworks. Nina van Doren lives and works in Amsterdam. Contact Nina.