There is a long history of thinking about technology and media as extensions of the body. According to this view, a hammer is an extension of our hand, a car an extension of our feet, and a telescope an extension of our eyes. Science has developed instruments to access phenomena we cannot perceive, since they are too small, too large, too fast, too slow, or because they involve forms of energy which are beyond the scope of our senses. This workshop, organised by LIMA & Sonic Acts, will focus on our senses and investigate the artistic potential of augmenting and obstructing them.

Joost Rekveld will introduce different schools of thought that deal with human perception, from ancient concepts of perception as a meeting of influences, to cognitive psychology and more recent ideas such as enactivism. Inspiration is taken from animal senses that, compared to human senses, have a range that is sometimes refined to the most basic imaginable. The workshop will provide examples of attempts to understand such non-human perspectives, as the sensory worlds of most animals are almost completely inaccessible to us. It will also consider research into the development of artificial eyes for blind people and think about cyborgs and the intimate relations between humans and technological devices. The group will examine projects by artists and designers who address, for example, the web of invisible relations within an urban environment, or reveal things we cannot normally perceive. A discussion about whether it is even possible to understand things humans have never perceived before will be part of the workshop as well. Using wearable devices, participants will experiment with the perception of our surroundings. Taking inspiration from two early video works by Steina and Woody Vasulka (Telc and Reminiscence, both from 1974), participants will translate the output of various types of sensors to real-time visuals. As a practical starting point Android phones in cardboard ‘virtual reality’ viewers will be used, with the possibility of extending the interference with other senses and devices. An important aspect of the workshop is the use by participants of their self-built devices during short field trips around the city, whereby they will become aware of one’s self-inflicted sensory modifications: How does modifying one’s sensory system affect interaction with one’s environment? Do we discover things we did not know before? A small reader with texts will be made available to participants. Large Android phones are welcome. There will be a very informal, semi-public presentation at the end of the workshop.

Enrolment
This workshop is aimed at art students and emerging artists, but is also open to people with different backgrounds and motivations. Up to 15 people can participate. To apply please send a short biography, a motivation why you would like to attend, why you are interested in research-through-practice, and your expectations to info@li-ma.nl and workshop@sonicacts.com, with ‘application workshop Joost Rekveld’ in the subject line. The deadline for application is Monday 7 November 2016. Participants must attend the full programme. Late or incomplete applications will not be considered. A detailed schedule, a small reader and more information about how to prepare for the workshop will be sent to the selected participants.

Fee
Participants pay a contribution of €30. Lunches will be provided.

About Joost Rekveld
Joost Rekveld (NL) is motivated by what we can learn from a dialogue with machines. In his work, he explores the sensory effects of systems of his own design, often inspired by forgotten corners in the history of science and technology. His films, installations and live performances are composed documentaries of the worlds opened by such systems. In their sensuality they are an attempt to reach an intimate and embodied understanding of our technological world. www.joostrekveld.net

About UNFOLD
UNFOLD is a new one-year research project conducted by LIMA and a collaborative, international research network that examines re-interpretation as emerging practice for the preservation of media artworks. UNFOLD researches processes of documentation and conservation of performance and post-net and digital art in relation to the live-ness of dance, theatre and music, which have ensured their survival and transmission through live performance. Bearing in mind that media and digital art share a number of characteristics with performance art, UNFOLD asks if we can develop new standards and techniques within media art preservation strategies by using reinterpretation to capture the hybrid, contextual and live qualities of an original piece, rather than proposing an ongoing process of changing platforms and operating systems. As part of UNFOLD, artist Joost Rekveld will re-interpret two works by The Vasulkas. 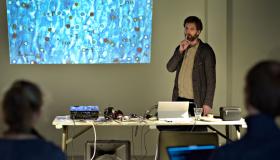 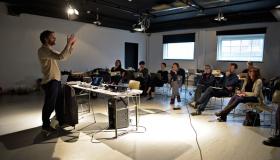 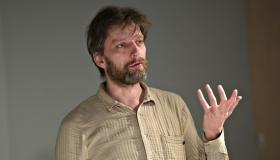 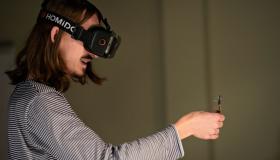 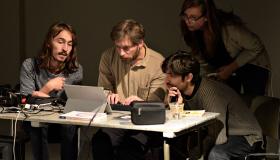 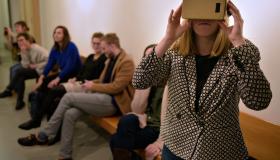 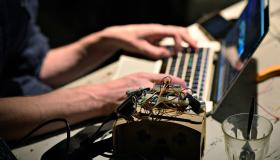 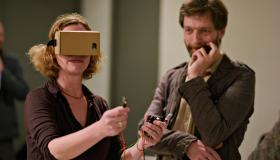