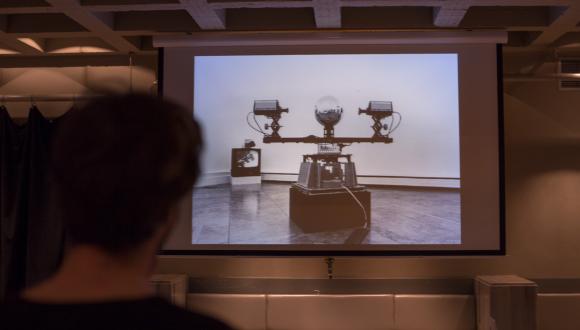 The work #67 by Joost Rekveld was commissioned by LIMA as part of UNFOLD, a project that investigates re-interpretation as a strategy for the preservation and activation of media art works.

Gaby Wijers (Director LIMA) and Lara Garcia Diaz (Art Theorist and UNFOLD - researcher) are the core researchers of the project. Simultaneously, artist Joost Rekveld produced a re-interpretation of two works by the The Vasulkas. Through this a case study emerged for the researchers to draw upon, in order to identify parallels in the mediation of a work and related notions of authorship, authenticity, autonomy, documentation, memory, continuity and liveness.

The two works by Steina and Woody Vasulka, 'Reminiscence' and 'Telc', are made around 1974. Both works were made during the same voyage and using the same techniques. Each video was shot on one location in Bohemia, with a handheld camera, using long takes without any obvious editing. The images were processed through the Rutt-Etra video processor and resynchronized with the direct, unprocessed sound that was recorded with the source images. The result are two works that have a strong first-person perspective, and that seem to navigate an almost abstract, but haptic, image space. The unprocessed sound of the original videorecording anchors these abstract images firmly in an everyday world. The works have been interpreted as dealing with the space of memories, and of giving a strong sense of revisiting spaces that are intimately known from childhood but that have become foreign through time.

The reason to choose these works is twofold. First, the oeuvre of The Vasulkas - pioneers in the field of video art - is part of the LIMA collection. Second, Joost Rekveld has been inspired by their work for a longer time. According to Joost, these works are examples of how single ­channel works can document radically different modes of perceiving. Also, he finds them very suggestive of concepts and practices in which technology can mediate our interactions with the real world around us and move beyond the screen.

The aim for his case study is to investigate the possibilities of wearable devices that give a different kind of sensory access to the environment. Researching other sensors than the visual and the audible, like electrostatic sensors in combination with sensors for electromagnetic fields, temperature gradients or the direction of polarisation of light come to mind. The aim would be to make work that also strongly conveys the impression of navigating through a space, but to visualize a space that is not derived from visual information.

Part of the UNFOLD project was the workshop 'Sensory Augmentation and Obstruction', organised by LIMA and Sonic Acts and Joost Rekveld in order to research methods and techniques Rekveld wanted to explore for this new work. For more information about this workshop, see the link on the right. 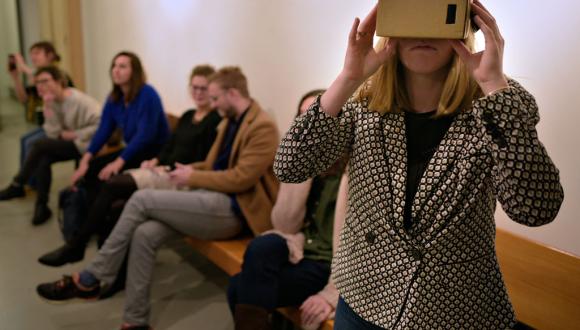 Eventually the final re-interpretation emerged with the title #67.

As a tribute to 'Reminiscence', and 'Telc' by Steina and Woody Vasulka, #67 (an analog HD video work) is guided by the concept of 'reafference', a term that refers to the perceptual changes we cause when we move our sensory organs. In #67, we witness a stroll through the electromagnetic worlds of machines and men, structured by the 50 Hz that is both the fundamental frequency of our power lines and the framerate of analog video.

Fragments of unedited video footage was transformed into fascinating, abstract scenery using a Rutt-Etra scan processor. One of the things that remain from the original video footage is the impression of an observer navigating through spaces, and a strong sense of what in perception psychology has been called 're-afference', a term that refers to the perceptual changes we cause when we move our sensory organs. In this reading, these works were important references for Joost Rekveld's earlier experiments concerning sensory augmentation and his attempts to make environmental phenomena visible or tangible that can not normally be perceived by humans.
During the making of #67, Rekveld built a modern analog electronic equivalent of the original Rutt-Etra processor, as part of his interest in the cultures of analog electronics and analog computing. As a further exploration of the materiality of signals, Rekveld also started capturing the electromagnetic fluctuations omnipresent in an urban environment, as they emanate from power lines, electromotors, fluorescent lights and all sorts of wireless communications. Many of these have frequencies that are multiples of 50 Hz, the frequency of the alternating current in our power networks that is for that reason also the frame rate of analog video.
In #67, we witness a stroll through the electromagnetic worlds of machines and men, a world with a tonal coherence that humans rarely perceive. The result is similar to operating within an alien mode of perception, at once visceral in quite a human way, while also preserving something of its real world referents in a manner that allows us to connect and participate in the image.

The work #67 premiered at the International Film Festival Rotterdam in 2017.

There is a long history of thinking about technology and media as extensions of the body. According to this view, a...

Premiere #67 by Joost Rekveld at IFFR

The 46th edition of the International Film Festival Rotterdam starts January 25, 2017. Like every year, LIMA and its...