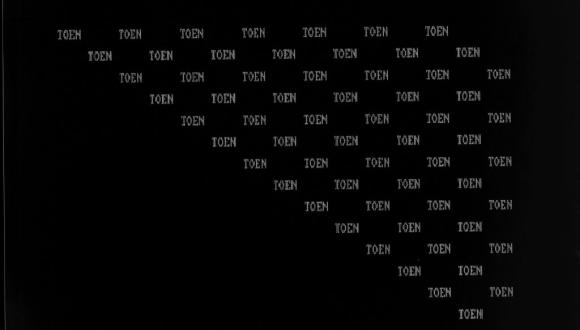 Toen en Nu is a born-digital, live-generated installation programmed in AmigaBASIC created in 1990, the last year of Mul’s studies and three years before the introduction of the internet. Based around the words “toen” (“then” in English) and “nu” (“now”), the artwork plays with the concept of time, alluding to the idea that the “now moment” is ever-evasive. The artwork consists of a 1990s Amiga computer and monitor. On the monitor screen the word “nu” flashes quickly, but quickly with a randomly selected time interval, flashes into the word “toen”. This repeats continuously, with the word “nu” flashing on the screen and quickly changing to “nu”, endlessly printing more a more words to the screen.
To be able to present Toen en Nu in 2017 it was refurbished, with Mul replacing the hard disk of the Amiga 1200 with an emulator compact flash (CF) card to make the work less susceptible to breaking since this removed the computer’s moving, mechanical parts. This was done to ensure the artwork can still run on a 1990s Amiga computer and monitor. While Mul didn’t consider the equipment used as significant to the concept of the work at the time of its creation in 1990, upon reflection through the artist interview realised that the aesthetic quality of the computer and monitor from the 90s as well as the visual quality of the “toen” and “nu” displayed on the screen suggests to the audience the historical context of the work. Furthermore, showing both the monitor and the computer helps people create a link between the computer and what they see, enabling them to understand that it runs in real-time. This live-generated, time-based aspect is the crux of the artwork’s concept: the real-time “now” moment that the flashing of the words “nu” into “toen” on the screen evokes is the subject of the artwork itself,  and as such it must run as live-generated. Consequently, a preservation strategy could not include presenting the display of the words “nu” and then “toen” on the screen from pre-recorded media, fixed in time.

In terms of preservation, the scarcity of working Amiga computers and Amiga CRT monitors from the 1990s is a real concern, as is the need for a younger generation to have the knowledge to understand what these computers are and be familiar with them if they see the installation. As such, the ideal scenario for the artwork is that the AmigaBASIC programme runs off of an Amiga computer (including models 1200, 500, 2000, 3000, 4000) with a compatible Amiga CRT monitor. To ensure the longevity of these computers, it is now favourable for Mul to remove the Amiga hard drive and replace it with the CF-card as a hard disk as the artwork still runs through the Amiga and presents the work as a live-generated piece with the AmigaBASIC programme running. This reduces the likelihood of mechanical failure as the mechanical parts of the computer have been removed. To safeguard the artwork a backup is being stored in LIMA’s art repository, and a written copy of the code is stored with the case study at LIMA.