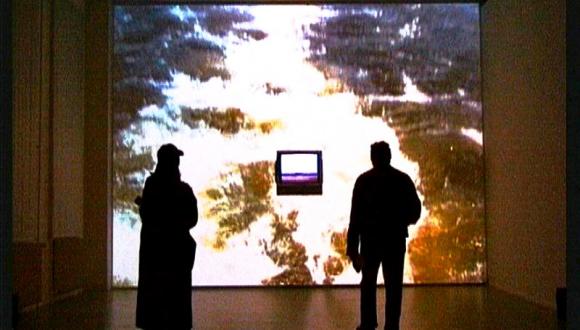 This Land is Man-Made is an interactive installation that explores the relationship between a personal narrative of loss, mourning, and nostalgia and the Dutch polder landscape. The artwork is composed of two parts: a television monitor mounted on the wall displaying a video of a static shot of Dutch polder landscape while a poem text scrolls across it, and a video projection cast across the entirety of the wall the monitor is mounted to that presents a looping video backdrop of a scene of a harbour focused on a moving image of churning water. The projection plays constantly but is activated by a sensor when someone walks towards the monitor, showing the projected video zooming further and further into the swirling water as the person moves closer to read the text of the poem on the monitor.

The re-staging of the work at Stedelijk Museum Schiedam made it clear that the shape and size of the exhibition space of the artwork is critical for its proper functioning and its ability to engage the audience in the intended way. At Schiedam, the exhibition space was not long enough, and as such, the spectator could already read the text on the monitor when entering the room, and thus was not as enticed to walk towards the monitor and activate the sensor for the video projection. As such, following the instructions listed in the artwork report of the required size and shape of the exhibition space is crucial to the work. Sound is also a key aspect of the experience of the work. The interactivity script describes how the sound behaves in relationship to where the viewer is positioned and the installation instructions developed articulate how to set these correctly. At Stedelijk Museum Schiedam the sound levels were not set ideally, and as such, the viewer could already hear the sound from the monitor on the video before they were right in front of it. In this instance of exhibiting the work, it was virtually impossible to set the sound settings as desired due to the sounds of the other sound-producing artworks in the same exhibition space. For future presentations, reading the interactivity script and following the installation instructions will help ensure the sound levels are set at the ideal levels where possible (given the exhibition design), offering the viewer the intended set-up of the artwork.

The technical preservation of the artwork in the next 15 years does not currently hold many concerns. In order for the work to be presented at Stedelijk Museum Schiedam the technology was updated, migrating from the original C-code (by programming collaborator Carlo Prelz) under a Linux OS to run in MaxMSP (by Erik Overmeire) under an OSX operating system. In addition, the original sensor, a SICK LMS200, has been replaced with a newer and smaller SICK LMS 100. These updates simplify the artwork’s technology and do not augment its function or behaviour, and can be considered the current ideal technology to use for the installation.

The algorithm of the artwork is quite simple to describe: the video projection movie is divided into a series of video clips that are looped, and played at different intervals as the viewer moves towards the monitor, which is documented and described by Geert in the artwork’s video registration. What is key to the artwork is maintaining the accessibility of both the looping video clip files and the video that plays on the monitor, which are now both being stored with LIMA. If some sort of further upgrading would be required for the work to be functional in 15 years, migration, as opposed to emulation which would be more complicated and unnecessary, could be used again.