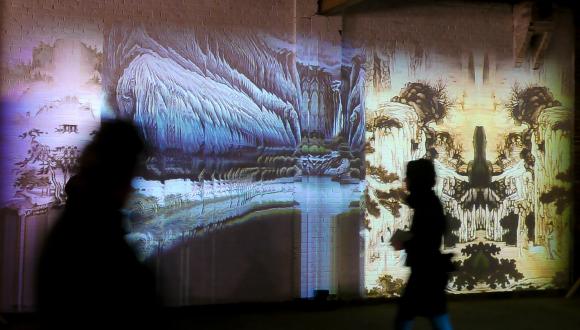 Geert Mul originally created Horizons (2008) as an intervention at the Museum Boijmans van Beuningen where it was on show for more than half a year. With Horizons, Mul presents landscape paintings from the museum’s collection as an interactive installation. The horizons of these digitised paintings are aligned to the same height. The computer-generated image is projected on the wall, using the entire wall width, with the image filling the space from left to right. Through the use of sensors, visitors walking around the space cause the image to be activated, splitting the image of the painting on the surface and revealing a new painting from behind. In this way, the visitor does not just explore one work, but rather, a whole collection. Horizons was acquired by the Boijmans van Beuningen museum as a spatial installation through which visitors can explore paintings through an alternative “databased” structure.

Shan Shui (2013) was created as a response to a call for artworks for the China Expo at Raw Art Rotterdam in 2013. Like Horizon, a sensor is used to enable visitors to command the paintings and peel back layers of digitised paintings to reveal new ones beneath. It presents Chinese landscape paintings with elements typical of the genre such as rocks, water, air and clouds. Where these different elements touch in the paintings, the dynamics become apparent. While the western depiction of the landscape focuses on the spatial aspect of the landscape (folded around the spectator who form the invisible centre of the landscape), the eastern depiction of landscape focuses on the dynamic and autonomous aspects of “the elements” that construct “nature”.  Mul wants the visitor to experience this dynamic, and so through using a sensor, enables the visitor to manipulate the projected paintings, inviting them to become part of the landscape through interacting and experiencing how the painting responds to them. Through the video registration, one can understand the reaction and timing of the artwork the each visitor’s position and movement within the room of the artwork.

Horizons and Shan Shui both manipulate and display images from an image database. They are both based on the same, custom-built software, are installed in the same way and are both interactive in the sense that the projected video and sound react to visitors’ movement in the space. Although the viewer triggers new images, he or she never has full control over them as the software chooses them at random. This unpredictable flux of images enriches the visitor’s explorations. The immersive experience of these works is another significant property. The main difference between Horizons and Shan Shui is the image collections that are displayed and the aspect ratio of the projection: Horizons uses an aspect ratio of 12:3, corresponding to three times 4:3, while Shan Shui has an aspect ratio of 8:3, corresponding to twice 4:3. This is related to the aspect ratio of landscape paintings in the western tradition (mainly horizontal) opposed to the eastern tradition (mainly vertical). To project at a large size, the video projections are split up across three projectors for Horizons and across two projectors for Shan Shui.

The preconditions for the long-term preservation of Horizons and Shan Shui are good: the computer hardware is more or less standard, the programmer used a non-proprietary operating system and programming languages and the source code is accessible.

From the hardware point of view the tracking sensor is a dependency. However, this sensor is very robust (made for industrial use) and new sensors still have the same connectors. Whether the data protocols of new sensors are the same, has to be checked. The replacement of the sensor by a different technology would mean that certain programs would have to be re-programmed and re-compiled. Another dependency is the serial-USB-adapter whose driver has to be installed on the computer. Nvidia, the brand of video card is hard-coded into the software, as Nvidia is the best video card for fast graphics rendering compatible with Linux. It is intended to eliminate this dependency by  auto-detecting the video card. Whether the results are sufficient will have to be investigated. Last but not least, it could prove difficult in the future to find projectors with the right aspect ratio and resolution. However, the software allows a certain flexibility of the output resolution, so that it could be adapted to new devices. As the aspect ratio of the whole video image is a significant property of these artworks, this flexibility should be taken advantage of only to a small extent.