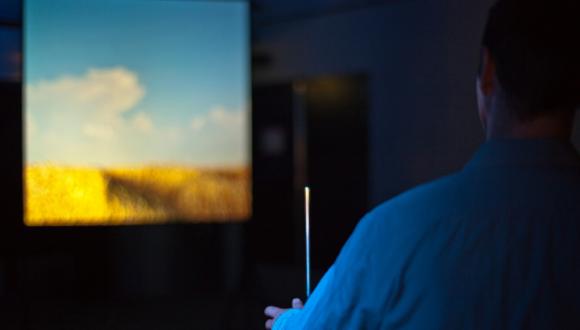 God’s Browser is a born-digital interactive installation that invites the viewer into the informational space of the internet. Through the use of a theremin, an electronic instrument that requires no direct contact, the viewer becomes the conductor of a stop-motion-like film generated from 1.5 million images sourced from the internet between 2008 and 2010 and that now reside on a database from where the installation draws them.

The theremin is used as an interface through which the work is activated, and as such, the theremin’s response is key to the work behaving correctly. The distance at which the theremin is activated is pretty much fixed to the properties of the theremin itself. The theremin is a capacitive sensor and responds to mass, not necessarily people and for this reasons is very sensitive to everything, including humidity in the air. For example, if the installation is presented in another space, it might react a bit differently in terms of the distance at which the viewer’s hand needs to be to activate it. This also means the theremin is not stable and during the artwork’s exhibition, the settings will sometimes need to be tweaked to fine-tune the instrument’s response to close proximity if it begins to behave strangely. The video registration of the God’s Browser keenly illustrates the proper behaviour of the artwork, and captures Mul showing and describing how the artwork should respond, giving insight into its proper functioning should the settings need to be adjusted before or during presentation.

In terms of preservation, the software of God’s Browser is one of the most complex of all of Mul’s works as it works with a database of 1.5 million images that makes comparisons between each image and every other image held (meaning it requires a total of two hundred and twenty-five trillion comparisons). The key to the preservation of the work is ensuring the software is still able to run, which will require compatible video card, motherboard and operating systems. As Mul has stated: “In terms of preservation you don’t actually change the software. But you make sure it’s safe and then make sure that there is an available compatible system with which to play the work.” As such, safe storage of the complete system backup and copies of the source code and related database of images with LIMA’s digital art repository is key to ensuring future presentations.

The theremin is a also a key component of the artwork, specifically, a theremin with a voltage out is necessary. Will this still be available in the future? As the theremin has survived as an obscure instrument since 1928, with more models made by more manufacturers, it’s likely that the availability of an analogue pitch out theremin will not be hindered in the next 15 years.