This case study is part of the collaborative researchprogram Transformatie Digitale Kunst (2014-2015). The researchprogram is concerned with the long-term preservation, presentation and distribution of software based artworks. BLOCKS was brought in as a case-study artwork by Gemeentemuseum Den Haag.

Description and Context of the artwork

BLOCKS is a software-based artwork that was made in 1998 for a specific placing in Gemeentemuseum Den Haag. In real-time the computerprogram generates three-dimensional shapes that move and shift within a projection screen, fitted to the alcove on the first floor of the museum. The computer and projector were hidden behind the screen and projected through a mirror construction. The colour of the generated shapes, or 'blocks' are adapted to the gray tilestone interior of the museum. 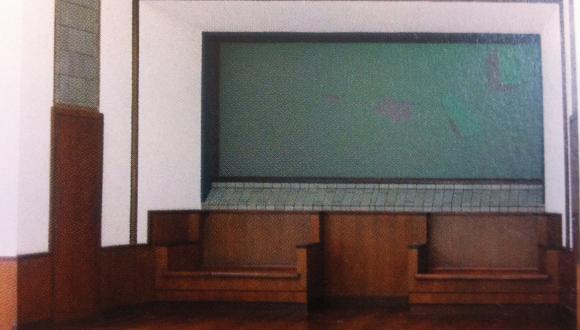 The artwork was installed after a big renovation of the museum in the 1990's. It served as an opening piece to the 'erezaal', where visitors enter most of the museum's large exhibitions. In this particular hall there is sunlight coming in from the top windows, an intentional decision of the architect Berlage, in order centralize an important work of art on this location.

Preservation research
Due to incoming daylight in the museum, the projection of the program was too faint and BLOCKS was removed a few years after its placing. Currently the alcove is walled in with woodwork. In the first expert-meeting of the research project Transformatie Digitale Kunst, the museum removed the woodwork to show the original set-up. The orignial mirror construction was still intact but the computer and the program returned to the artist.

In order to reconstruct this work, current new projection techniques allow for effective display of the work. The museum would prefer a more flexibel placing of the work in order to include BLOCKS in other exhibitions, and consider other artworks for this prominent place in the building. Site-specificity and options in presentation are issues that can be overcome, the technical functioning of the software itself however, demands most attention. As the related case-study SHFT-34 exemplifies, the software needs to migrate to a new standard in order to be preserved for the long term.

Project
The central questions for the future presentation and conservation of any work coming into a museum collection are “...